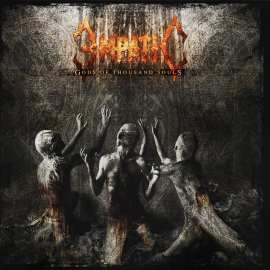 Buy on Amazon Buy on iTunes

„Crafting a modern metal sound, Empatic gel a melodic death tone, with serenading guitar riffs and aggressive rhythm time signatures, especially prevalent on the opener ‘Green Mile’ and they take the groove a little further with the Amon Amarth-isms of ‘So-What?’ mixing some of the groove metal associated with say Pissing Razors or dISBELIEF.”

„The drumming architecture is simply exquisite high point in this album for sure, not only for the sound that is a well balanced mix between natural/triggered drums, but also for the intelligent work performed composed of intelligent bridges, killer slow tempos build up with double blasts amazing…definitely…killer !!!” – ARCHAIC MAGAZINE

"In general, we have to say that “Gods of Thousand Souls” is a very solid debut album from Empatic. While the band’s sound is not quite perfect, it is very engaging and excellently crafted. They might not be re-inventing the wheel, but they are playing some kick-ass songs and you should definitely check them out.” – INFERNAL MASQUERADE

This song is already in the playlist, Whould you like to add it anyway?